New update of the EBP viewer increases to 20.6 million the number of map combinations available to choose from!

Today, the EBP demo viewer has been updated with nearly 50 millions of new data. Moreover, the number of bird species available in the portal has been doubled and the period of years extended to 2010-2015. This is a first visible output of the Life EBP project.

Currently, the EBP demo viewer depicts animated weekly distribution maps of 100 different bird species for six years (2010-2015). Moreover, a new type of map has been added, allowing the visualization of the overall seasonal patterns of bird distribution by combining the whole six years of available data. Since two animated maps of any species, year and type can be selected to be shown simultaneously for direct comparison, this means that after the new update more than 20.6 million different map combinations are now available to choose from! Ten times more than before. 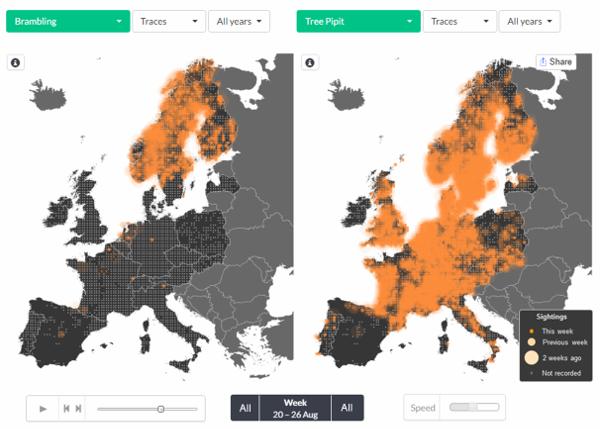 Snapshot of the EBP viewer: two distribution maps combining all available years of data (2010-2015) for the Brambling and the Tree Pipit, two of the new species available after the new update.