How many birds are on the move? Towards quantitative species-specific migration models

In the context of LIFE EBP Action 12, in this post we describe another example of how EBP data and that from other external data sources (in this case radar observations) can be combined to better understand the nature of avian bird movements. In a previous post we dealt with the combination of EBP data and EURING bird recoveries.

EBP describes the geographical and seasonal occurrence of migratory species throughout Europe. But despite the incredible amount of information collected it remains difficult to estimate how many individual birds do actively migrate.

The European network of weather surveillance radar data (OPERA) offers a unique opportunity to estimate the number of migrating birds – day and night. Thanks to an interdisciplinary researcher network (ENRAM), it is nowadays possible to retrieve every ten minutes the avian migration intensity at up to 80 radar locations from 12 countries*. The data is automatically processed to extract density of birds aloft as well as the birds’ flight direction and speed. This continental network of weather radar surveillance provides quantitative information of avian migration at a continental scale and with high temporal resolution.

The above animation shows changes in migration intensity for three weeks during autumn migration in 2016 (from September 19th to October 9th, colour legend for low – medium – high density: blue – green - yellow, circles show locations of the weather surveillance radar). Highest intensity of bird migration is observed in central Germany and central France, with birds seemingly arriving from Poland rather than from Scandinavia.

Current work on developing probabilistic models for species-specific migration aims at integrating present information on radar migration intensity and EBP species occurrence, together with long term seasonal and geographical distribution of species. Thus combining data from EBP helps to define which bird species currently produce most of the echoes appearing on the radar screens. Such species-specific migration models open new opportunities to investigate the dynamics of avian migration and enable to predict events of mass migration. Information on mass migration events can alert for risks like the spread of avian disease, improve aviation safety and reduce mortality risks of birds with human made structures, e.g. windfarms or high buildings. 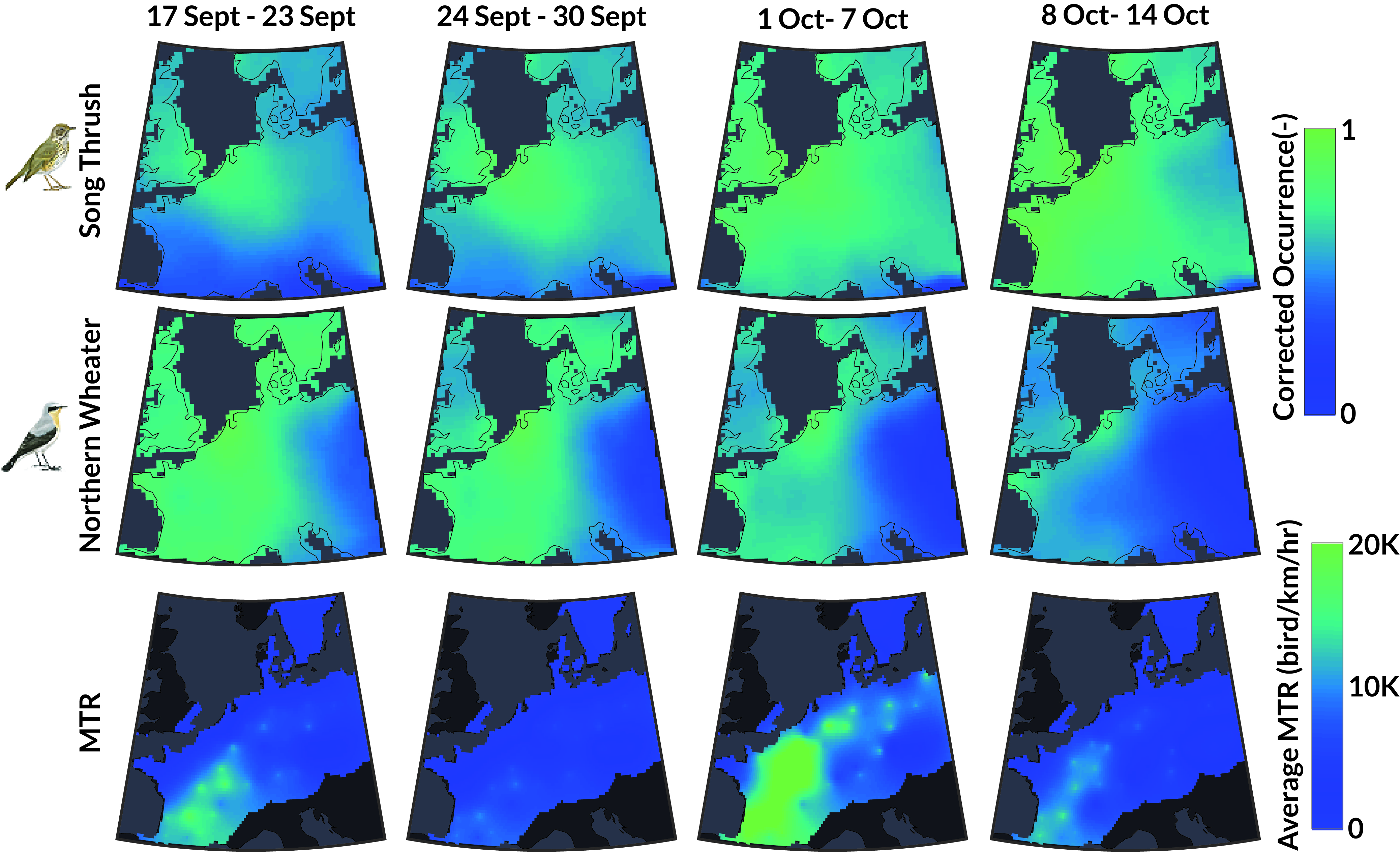 The above figure presents a general comparison between the Corrected Regional Occurrence (CRO) map of Song Thrush and Northern Wheatear (from EBP) and the average mean traffic rate (MTR) map computed based on data from weather radar.

Although at first glance, no obvious similarity appears, a careful analysis of these maps can reveal some interesting ties. The MTR maps show a strong migration during the week of October 1-7 in Western continental Europe. The same week appears to be a turning point in the departure of Northern Wheatear and the mass arrival in Song Thrush at this same location. In contrast, the bad weather of the week before results in a modest  traffic rate according to weather radar. In comparison, the occurrence of both species remains similar compared to the previous week.

Despite the promising future for the aggregation of such complementary datasets, some challenges are still in the ways. Firstly, both methods are in their early stage and consequently their accuracy and uncertainty still need to be scrutinized. Secondly, the link between nocturnal active migration and diurnal observations by observers is not direct and a thorough understanding of their relationship is still required. Thirdly, the difference of temporal (and spatial) resolution and coverage between the two datasets requires some alignments.  A day-by-day analysis of both datasets, which is now within reach, will provide deeper insights in timing and magnitude of mass migration over Europe.

We acknowledge the European Operational Program for Exchange of Weather Radar Information (EUMETNET/OPERA) for providing access to European radar data, facilitated through a research-only license agreement between EUMETNET/OPERA members and ENRAM.